Notice: Use of this site constitutes your acceptance of these Terms of Use.
This article is brought to you by

Jake Cutter and the Philosopher's Stone
by Professor Klaus Werner Immerschreiben,
Editor Emeritus of the Seiber Islands Historical Journal &
Chairman of the Board, Monkey Bar-ometrics
Part One: Who was Jake Cutter's Father?

The "Bible" states that Jake Cutter:

"was born in 1901, the bastard son of a famous aviation pioneer who now owns a large aircraft corporation in San Diego. His mother, deceased, was a famous Broadway actress; a turn-of-the-century Vanessa Redgrave type who didn't worry about public convention." The Bible then adds that "[w]hile Jake was educated by his father at Cornell from 1920-24, he has never been officially recognized by him. . . ."

As is now well known, Jake Cutter's mother was Daphne Diana "Daisy" Cutter. [2] She was not, in fact, a famous Broadway actress, but did work in vaudeville with her slightly older twin sister Cassandra Cleolia "Cookie" Cutter. Owing to their lack of success as comedic singers and dancers, in 1898 the Cutter Sisters started working with a magician whose stage name was Harry Potter.[3]

It is also well known that in the spring of 1899, Harry Potter and his lovely assistant--the Cutter Sisters--appeared in Ithaca, New York. In the audience for one of the shows was one Jacob S. Armour, a senior at Cornell University.[4] Since seeing one of Harry Houdini's performances as a child, Jacob had been interested in magic. While watching Harry Potter, he fell in love. . .not only with magic, but also with Harry's lovely assistant. After the show, he went backstage and discovered that Potter's lovely assistant was actually sisters. This discovery dampened neither his interest in magic nor his infatuation with the "prettier" twin, Daisy. Somehow, despite attending most of Potter's performances all over New York in the next couple of months, Jacob managed to graduate from Cornell with honours. At his graduation party, Jacob announced to friends and family that he was going to Europe to study. Instead, he joined "Harry Potter & Co." for its tour of the western United States.

Now well known, but unbeknownst to Jacob at the time, one of his father's business associates owned the Barataria Boat Works in Alviso and recognized Jacob at Harry Potter & Co.'s performance there in March 1900. At a meeting four months later with Jacob's father, he happened to mention in passing that he had seen Jacob. Jacob's father immediately blocked Jacob's access to his bank accounts and hired private detectives to find him. The trail was, however, already cold. Harry Potter & Co. had split up, with Harry and Cookie Potter finishing the tour, the now-pregnant Daisy going home to Brooklyn, New York, and the heart-broken Jacob apparently disappearing from the face of the earth. [5] Despite considerable time, effort, and expense, the private detectives hired by his father were unable to find Jacob and after a year the search was abandoned. 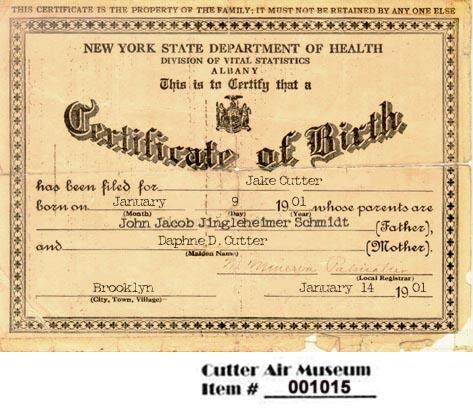 In the meantime, assuming that his son had "gotten her in trouble", Jacob's father directed his personal lawyer--one Winston Wolf--to make the appropriate arrangements with Daisy. These included first-class medical care, a generous monthly allowance for life, and a confidentiality agreement.

The original of Jake Cutter's birth certificate (right) was among the treasures recently discovered in Corky's CONEX. It confirms that Jake Cutter was born on January 9, 1901, in Brooklyn, New York. More importantly, rigorous testing and analysis demonstrated its basic authenticity, confirmed that it had been altered, and revealed that the incompletely erased name "Giacomo Lizardo" appears underneath the somewhat crudely inserted name "John Jacob Jingleheimer Schmidt". 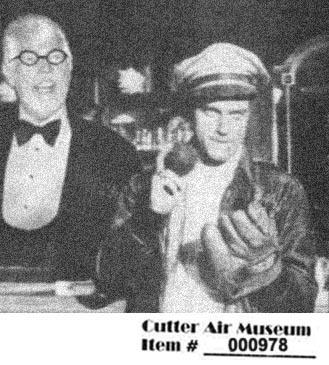 Professor Oliver Stein subsequently proved in his monograph that Schmidt--then a merchant seaman--could not have been Jake Cutter's father as he was at sea from December 1899 until July of 1900. He also revealed a photograph found in Corky's CONEX (left) which shows Harry Potter nee Giacomo Lizardo with Jake Cutter in the famous Monkey Bar. It is clearly established that Harry Potter (and, presumably, Cookie Cutter) were in the Seiber Islands (and, presumably the Marivellas) in July of 1937.[6] Professor Stein concluded from this photograph, and the fact--undisputed at that time--that there was no evidence that Jake Cutter ever had any contact with Jacob Armour, that only "Jake" Lizardo could be Jake Cutter's father.

Of course, the new evidence that Giacomo Lizardo's name actually appears on Jake Cutter's birth certificate would seem to support Professor's "Lone Jake" theory that Lizardo was Jake Cutter's father. However, Daisy Cutter's listing Lizardo as the father could be explained in one of two ways: 1) She may have believed that Lizardo was, in fact, the father [7] or 2) She believed Jacob Armour was the father, but knew that she would be violating her confidentiality agreement if she listed him. [8] 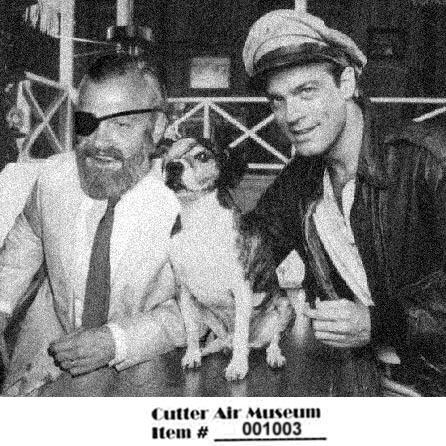 Now, for the first time, it is my distinct honour--and pleasure--to reveal the additional evidence which will finally prove the identity of Jake Cutter's father. This evidence was discovered in Corky's CONEX in a cigar box in a suitcase in a steamer trunk: a virtual Matruschka doll of priceless Jake Cutter memorabilia.[9] 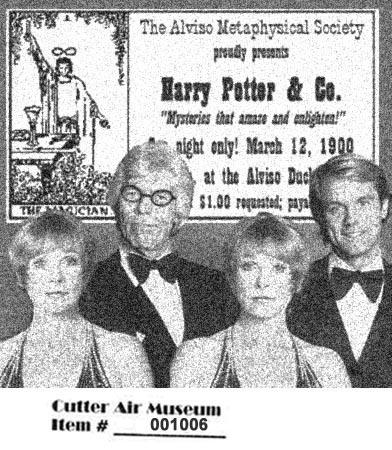 The second proof is the only photograph (left) which survives of what turned out to be not only the first and only tour of Harry Potter & Co. It was apparently taken in Alviso, California on or about March 12, 1900. Based on a computer analysis of this photograph with the other photographs shown here, it is clear that Harry Potter nee Giacomo Lizardo is on the left and Jacob Armour on the right. (We cannot, obviously, determine which of the two women is Jake's mother.)

Whatever belief (or doubt) Jake Cutter's mother may have had in 1901 about who was her son's father must have gradually--or perhaps even suddenly--evaporated when she compared her son's face with those in this photograph. Daisy needed no computer analysis to tell her that the boy's father was Jacob Armour and not Giacomo Lizardo.

But, as noted above, even Jacob Armour's family gave up hope in 1901 that he would ever be found. In 1905, they took the final step of obtaining a court order declaring him dead.[13] We must, of course, assume that neither Daisy nor Jake believed that he would ever actually get to meet his real father.