Notice: Use of this site constitutes your acceptance of these Terms of Use.

Immediately after VE Day, LtCdr Quinton McHale--whose very real World War II experiences were satirized in the American television series "McHale's Navy"--learned that he was going to get orders to scuttle his PT boat and return to the United States for discharge from active duty. With the assistance of the Grand Duke of Wotanberg (whose family McHale had helped rescue in 1938), McHale and his crew got orders for special temporary duty in the Grand Duchy and obtained transport both for themselves and their boat as well. PT 13 was formally presented to the Grand Duke at the Drachenrücken Reservoir in the Grand Duchy on Bastille Day 1945. At the ceremony, the Grand Duke announced that the boat would be renamed in McHale's honor as the Grand Ducal Gun Boat McHale.

After repair and refitting, the boat was assigned to 1 SEC, 8 DRAGOON PLT, GDD which had just returned from the Seiber Islands. It has been protecting the Drachenrücken Reservoir (and its seaplane landing area) ever since. In addition to its military responsibilities, the boat has also assisted the Constabulary in rescuing swimmers and boaters on the reservoir.

Here is a recent photograph of the boat at its dock on the reservoir. (Note: The GDGB McHale is the vessel on the left of the photograph.) 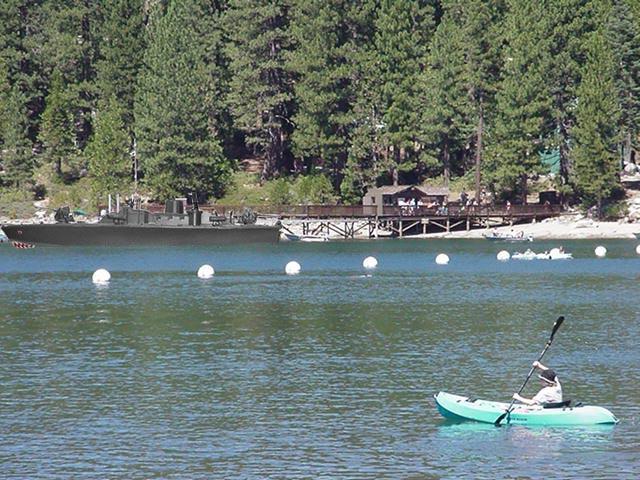 In the late 1990's, it was proposed that the boat be used as the test bed for a new and revolutionary weapons system being developed by the Yoyodyne Propulsion Systems--the GATOR System ("Gravitational Anomaly Targeting Optimized Rocket System"). According to Dr. John "Gator" McKlusky, Program Manager for GATOR, this system will facilitate the accurate targeting of 2.75 inch free flight rockets which have been used by armies around the word for decades. The key to the system is the GATOR-AID ("GATOR Anomaly Interpretation Device") which utilizes a truly revolutionary technology to detect and analyze the minute changes in the earth's gravitational field created by all objects, including military targets. Here is a previously classified chart regarding the boat showing its current armament*. The radome-like structure amidships is the GATORAID. 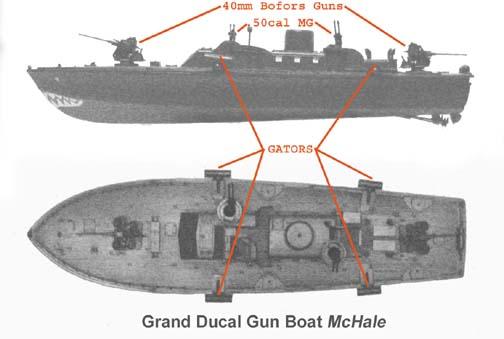 *This chart was previously classified MOST SECRET under the Grand Duchy's Official Secrets Act. However, under circumstances which are still under investigation, the chart somehow came into the possession of the author of an article published on the Internet. Since the proverbial cat is out of the bag, the chart is now declassified.