Notice: Use of this site constitutes your acceptance of these Terms of Use.
Rick Blaine 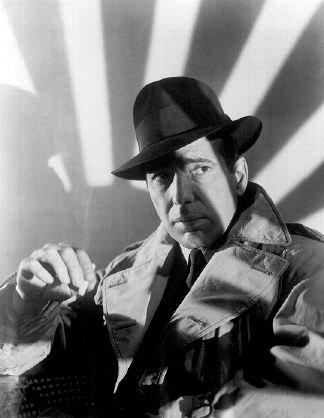 For most Americans, all they know about Rick Blaine is what they learned from the 1943 motion picture Casablanca. (In fact, most of them probably assume, incorrectly, that he is a fictional character.[1]) However, for Wotanbergers, Rick Blaine holds a very special place in their hearts. Not only was Rick Blaine in the vanguard of Free French soldiers that liberated Wotanberg from Nazi Germany's stranglehold in 1945, he later became one of its leading citizens. 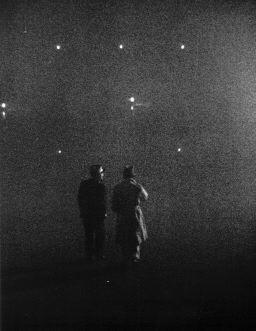 As those who have seen the Casablanca know, Rick Blaine and Capt Louis Renault left Casablanca to join the Free French garrison at Brazzaville. Both men formed a new unit (the 2e Companie de Marche de Brazzaville, a light motorized infantry company). With Capt Renault commanding and Rick serving as his lieutenant, the company was eventually sent to Egypt to assist the British in their struggle against German and Italian forces under the command of the "Desert Fox", Erwin Rommel. The company was part of the Free French Brigade that heroically defended Bir Hacheim at the southern end of the Gazala Line in mid-1942. Retreating to El Alamein with the rest of the Allied forces, Capt Renault's company was sent to save a small group of Allied soldiers defending a small outpost in the middle of the desert (whose own epic story was portrayed in the motion picture Sahara).

Capt Renault and Lt Blaine immediately struck up a friendship with two of the members of that small group, Crown Prince (and Lt) Victor von Weselstein and Sgt Joe Gunn.[2] Aside from having survived one of the darker periods of the Second World war, the four friends had additional reason to celebrate--news that motion pictures were to be made in Hollywood about their heroic stories.[3]

In August 1942, the Crown Prince's uncle and commanding officer, Prince (and Major) Parsifal von Weselstein, arranged to have his unit, the Wotanberg Volunteer Group, attached to Capt Renault's company. This attachment that was to last through the rest of the war until Wotanberg's liberation in 1945. (For additional information regarding the Wotanberg Volunteer Group activities during the Second World war, please contact us.)

The Crown Prince invited both Rick Blaine and Louis Renault to stay in Wotanberg as long as they wished and arranged to have them both attached to the Wotanberger Army. After their discharge from the French Army soon after VE day, both men decided to stay in Wotanberg and became members of the newly reconstituted 6 Dragoon Platoon of the Grand-Ducal Dragoons. 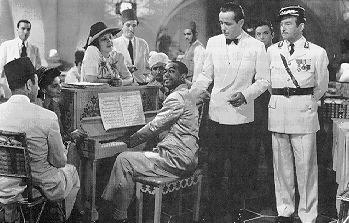 With financial assistance from the Crown Prince, Rick Blaine opened what he described as a "gin joint" called "Rick's Cafe Marocain". This establishment was decorated in the style of Rick's more famous one in Casablanca (which had been destroyed by the Germans). Rick was able to find some his staff from his Casablanca cafe, including his good friend Sam. As time went by, Rick's Cafe Marocain became a popular and highly profitable business.

Rick Blaine's financial success was not, unfortunately, accompanied by personal happiness. In 1947, shocked and heartbroken after hearing rumors of Victor and Ilsa Lund Laszlo's deaths at the hands of the Nazis in late 1945, Blaine set off in search of the truth. After a three-year search, Blaine found Victor and Ilsa alive and well in Norway with their eight-year old son, Victor Jr. [4]

Returning to Wotanberg in 1950, Blaine seemed to be a changed man. Although described as "Wotanberg's Most Eligible Bachelor", Blaine soon became engaged to an actress and singer from Vienna named Anna Schmidt.[5] Their wedding in the spring of 1951 was undoubtedly one of the biggest social events in Wotanberg's history. After a six-month honeymoon in the Seiber Islands, the Blaine's returned to Wotanberg.

The remainder of Rick Blaine's life was relatively unevenful, but in some ways its most productive. He adjusted well to life as a family man and was a devoted and beloved father to his three children. With the success of Rick's Cafe Marocain, Blaine was able branch out into other business enterprises and to devote much of his time to various charitable activities both at home and abroad. (The Grand-Ducal government will neither confirm, nor deny, that Rick Blaine was at any time in the employ of, or otherwise assisting, the Grand-Ducal Secret Service. However, it is clear that during one of his trips abroad, Rick Blaine met Vincent J. Ricardo.)

After returning from one of his trips abroad in 1970, Rick Blaine announced that he had sold all of his business interests to Trans-Global Enterprises and was retiring with his wife in the Seiber Islands. His departure from Wotanberg was virtually a day of mourning. Two years later, Rick Blaine (along with his wife) became missing, and presumed dead, while sailing from St Hubert to Boragora in the Marivellas.[6]

[1] For the first chapter of a fictional sequel to the motion picture Casablanca, click here.

[2] There was an uncanny resemblence between Sgt Gunn and Lt Blaine which was the source of some confusion not only to fellow soldiers but also the residents of Cairo. Click here for a photograph of the two men together at Shepheard's Hotel in Cairo. (Then Crown Prince (and Lt) Victor von Weselstein is the officer with his back to the camera.)

[3] Of course, the four friends were all quite pleased that, as can be seen in the posters for the motion picture shown below, the actor selected to portray Rick Blaine, Humphrey Bogart, closely resembled his friend. 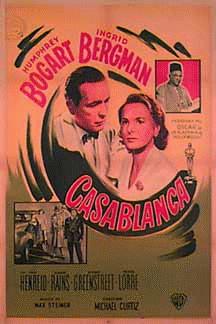 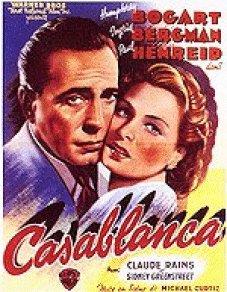 [4] Although Blaine would sometimes mention the remarkable resemblence between Victor Jr. and himself, Blaine would always insist that it was just one of life's interesting coincidences. Later, the resemblence would prove providential when Victor Jr. was able to take Blaine's place as host of Rick's Cafe Marocain when Rick retired in 1965.

[5] A character with the same name and quite similar in many ways to Anna Schmidt appeared in the motion picture The Third Man.

[6] The government of the Seiber Islands denies that the following photograph is actually of Rick Blaine at any secret atomic testing in or near its territory (or that of the Marivellas, for that matter).