Notice: Use of this site constitutes your acceptance of these Terms of Use.
The Grand Duchy of
Wotanberg's
Ministry of Science
presents
"PROJECT HOT AIR" 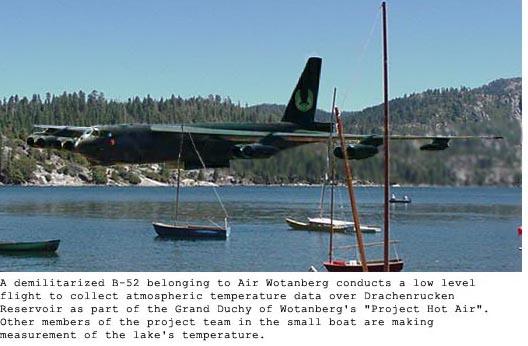 The citizens of the Grand Duchy of Wotanberg--like those in other countries--have reacted with growing concern to the reports appearing almost daily in the world's press regarding "Global Warming". In June 1997 the Grand Duke requested that the Minister of Science initiate a program to research the effects of global warming on the Grand Duchy's atmosphere.

Naming the program "Project Hot Air", the Minister appointed Dr Godberta Sinclair--a respected lecturer in climatology at the University of Trevorstein--as its director. Sinclair and her staff began with a systematic review of the extensive literature available on this subject, as well as surface temperatures recorded at Trevorstein and other locations in the Grand Duchy since the mid-1800's as well as atmospheric temperature data obtained from 1921 to the present on a somewhat periodinc basis by the Grand Ducal Air Force using its GDAS Wotanberg.

The Project is also collecting current data regarding temperatures throughout the Grand Duchy. To collect atmospheric temperatures, Dr Sinclair turned to Air Wotanberg, which obtained a demilitarized B-52, which had at one time been commanded by now-retired United States Air Force Brigadier General T. J. "King" Kong. In addition, the project is also making surface temperature measures at numerous locations throughout the Grand Duchy, as well as sub-surface temperatures both at the Drachenruecken Reservoir and the Ziebenzwerge Gold Mines.

The Project Team expect to conclude their research by the end of this fiscal year.